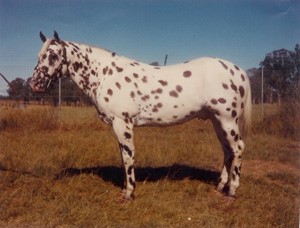 Breeze Bars, a bay leopard, was born the 5th of May 1972. Bred by Don Hetrick Vancouver and sold to W & M Stephens of Battleground Washinton, USA. He was then sold in1973 and imported to Australia as a yearling by Bob & Sally Wearing.

Breeze Bars came from old Appaloosa lines, which were mixed with working quarter horse, sprint racers and Thoroughbreds. This made for a young stallion who produced progeny with great versatility.

He spent his early years at Shalimar Stud in Beaudesert Qld where he stood alongside ‘Lakeside Cheers’ and other imported stallions. In 1985 Wal McCall purchased Breeze Bars and he moved to the south coast of NSW.