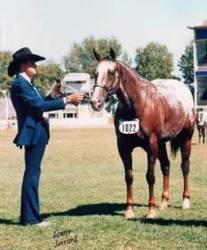 Sired by Tonga Royal Mr Sunday out of Mare Darling Sun Bonnet, ‘Bonnet” as she was known in the stables, was purchased by Lyn Myers and here was the start of her show career and success with the Myers Family,

Bonnet competed and excelled in open breed Hacking competitions and Preliminary and Novice Dressage levels. She worked hard in event every event and proudly showcased the Appaloosa breed in traditional English events, while still being an amazing all round, versatile mare.

Cayuse Sunday Bonnet won Many State and National awards in Western Pleasure, Bridle Path Hack, Western Riding, Trail, Reining and some sporting events. She was awarded many AAA End of Year and show Hi Point awards, most prestigiously being awarded with AAA Champion (No.18) & AAA Superior Award (No.18).

Not only was Bonnet a fantastic performance mare, she also won multiple Supreme and Grand Champion Halter awards.

In 1985 at the AAA National show she won Hi Point Junior Performance Horse and competed in Open and Youth events.

Bonnet foaled later that year and returned to the 1986 AAA National show with her progeny, a filly named Lynway Blue Chiffon, to take out champion in the Mare and Foal class. Bonnet again competed successfully in open and youth events proving her amazing nature, versatility and endurance.

Cayuse Sunday Bonnet only produced the one foal. This filly went on to be very successful show horse and champion producer in her own right.