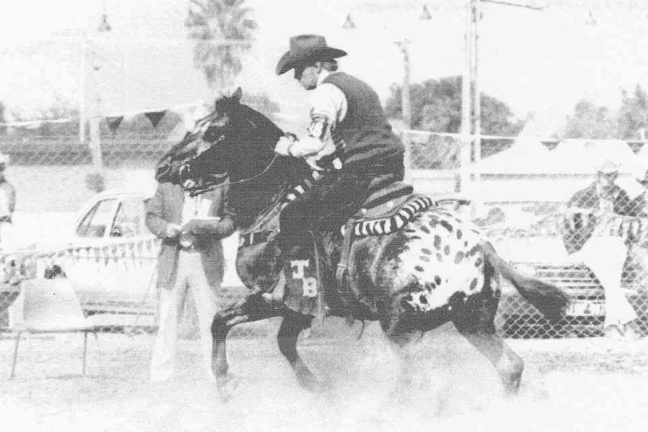 We saw it fit to report of both inductions in the one report – mainly because their stories support each other and together they are the foundation of our AAA breed.

Gregory Lougher, principal of Clover leaf stud, took a trip to Australia in 1964 to see the country that he fell in love with during a visit in WW2. The trip changed the future for him, his family and Clover Leaf Stud.

Greg was born in California. He was always a keen rider and was the first rodeo champion riding for university of California where he was studying to be a vet. His studies were interrupted when he was called for service in WW2. He was an instructor in horse shoeing, riding and shooting. Greg had to keep mules on their feet and could build a foot with packing, Stockholm tar and a makeshift shoe. After the war, Greg started training horses professionally. He was said to be the best hackamore reinsman of his time. One of the horses he showed successfully prior to the war was an appaloosa mare called Leilani, the won many hackamore and bridle classes in California and he always recalled her as his favourite horse. Because of her, Greg always had a soft spot for the Appaloosa Breed.

When Greg decided to move his family and Quarter Horse Stud to Australia, he also wanted to bring with him an Appaloosa because he felt the versatile breed would be ever so popular with Australians. He owned a daughter of Leilani and needed a stallion to breed her to in Australia (remember there was no shipped of frozen seamen in those days!)

On his search for a colt, he loved QH stallion Joker B. He really liked his type and found a little colt with Joker B lines, sired by Little Bull from an Appaloosa Mare who had been a great all round performer at rodeo and western events. The colt was Clover Joker Bull.

Clover Joker Bull was born in 1966 in Southern California, bred by Sharon Saare, a director of the American Appaloosa Horse Club

Joker Bull was weaned, halter broke and shortly after loaded onto a ship with 30 other Clover Leaf Stud horses on the journey to Australia.  In 1966 all horses to Australia had to spend 6 month quarantined in England. The trip was long and difficult, travelling through Panama Canal and the rough Atlantic seas.  All horses were in small tie boxes on deck and Greg was the only person looking after all 31. This meant 31 stalls to clean, horse stop feed and waters to fill 3 times a day as well as doing all the vet work required. This trip was made especially difficult when a shipping company error made an unscheduled stop in a French Harbour. This resulted in the 31 horses being stopped from landing in England and had to head to Belgium for 3 months’ quarantine first!

Eventually they made it to England for their 6-month Quarantine. During this time, foals were born including Clover Conchise, from a Quarter Horse mare who was in foal when she boarded the ship back in California. Nearly a year after leaving California, Joker Bull and the Clover Leaf horses arrived in Australia and Joker Bull was the first Appaloosa to walk onto Australian Soil.  The horses arrived on 2 different ships and his landed in Brisbane in August 1967. He caused such a fuss with press attracted to the scene immediately. He appeared in many National magazines and newspapers.

Gregory and his daughters Gail and Lori arrived soon after and establish Clover Leaf stud in Murrurundi NSW.

As a team, they exhibited the Western style of riding to Australians at Royal and country shows all over the east coast. Soon shows were developed where all western breeds could compete against each other and early western shows saw QH, Appaloosas, Paints and stock horses equally in classes. Best of all Appaloosas excelled in so many classes. These were some of the most memorable and enjoyable shows attended by Clover Leaf.

During his early years in Australia he won, trail, pleasure and cattle events.

After   Clover Joker Bull was sold to John and Kerry Bourke at Plenty Spots Stud, Maraylya near Sydney NSW. He was purchased for breeding, stock work and as a polocrosse mount for Mr Bourke.

After the sale of Clover Joker Bull, clover leaf stud continued with their Quarter Horse endeavours, where he was the first man honoured in the AQHA Hall of Fame for his hand in the popularity of the QH breed and Western industry.

Clover Leaf’s Stud’s decision to relocate to Australia and import the first Appaloosa when they did was vindicated as Appaloosas competed equally with all other western breeds and have since grown to have its own registry and association in Australia.