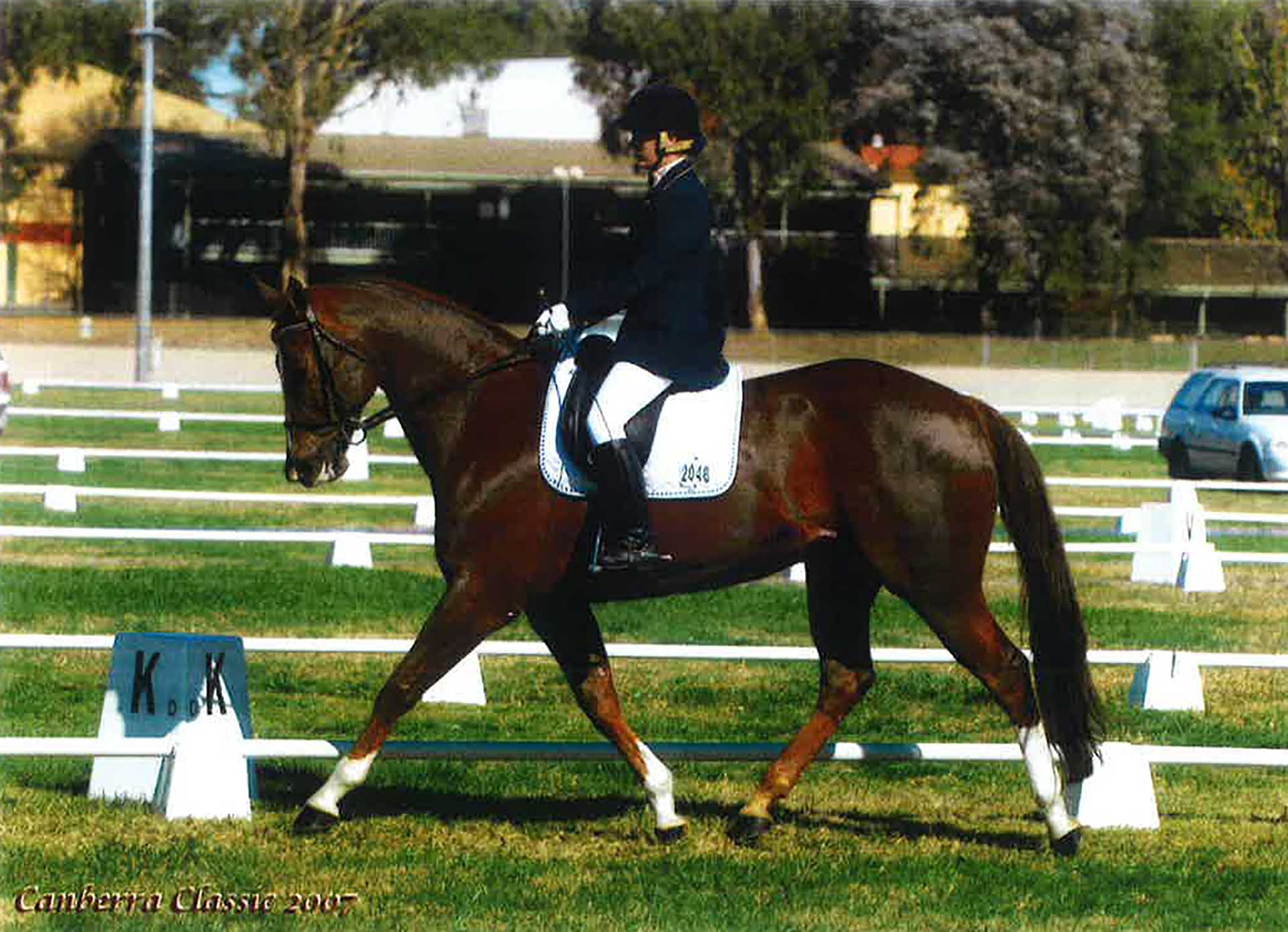 In October on 1997, a solid chestnut Appaloosa was born by the name of Colonial Hot and Handsome., Bred by Di and Tony Stanley of Colonial Park Stud, NSW, “Robbie” as he was knowing was sired by Sandford Vale Colonial Dusty out of Nareeb Nareeb Super Set.

From his early years, Robbie was seen to have real talent. He was he was ridable, trainable with a generous nature and a willing attitude, which helped model him into a dressage prospect.

By 2005, Colonial Hot and Handsome has competed 53 dressage tests in Preliminary, Novice and Elementary levels, bringing home 35 first out of 49 placing!

The years 2005 and 2006 really kick started Robbie’s dressage arena success.  In 2006 he was awarded, AAA Hi Point English Horse of Australia and NSW Performance Horse and his AAA Register of Merit in Dressage and the EFA NSW Elementary Horse of the Year – a feat no other Appaloosa has yet to reach.

During his successes, a NSW Dressage selector, assigned by Equestrian NSW, saw him in competition and noted his results. Colonial Hot and Handsome was an immediate nomination for the Young Rider Squad in 2005 with Vanessa Midwinter. From then he was a member of every squad until Vanessa turned 21 and was aged out of the competition. The team won the Young Rider novice competition (16yrs and Over) in 2005.

They went on to win Equestrian Australian Elementary Horse of the Year in 2006 and over the next 3 years at the International dressage level of Prix St George and Intermediate.

“This was indeed an amazing performance considering Robbie came from such an unexpected background with nearly 100% of horses at this level being purpose bred very expensive Warmbloods. Bot a quiet Appaloosa who was always just a little on the fat side” Said Past Australian Olympian Dressage rider Heath Ryan.

Robbie’s show career was certainly not over yet. Di and Tony Stanley loved him and succeeded to find another young rider Jessica Willard. Jessica rode Robbie at Prix ST George level and intermediate 1. They went on in 2012 to win at Hunter Valley Championships and gain placings a Sydney CDI.

From here, Robbie did not slow down, after Jessica moved away to uni, Di and Tony found Robbie a professional dressage rider Shaun France and at the ripe age of 15 years Robbie began training at Grand Prix work. Shaun had been Jessica and Robbie’s trainer for 2 years prior and said he loved his time together and the challenges to compete at the highest levels.

“There are probably less than 3% of the entire horse population in the world capable of training and competing in Grand Prix. The thought of this for a 15 years old solid appaloosa Gelding was laughable. Just one thing. Someone forgot to tell Robbie…. he became Hunter Valley Area Grand Prix Champion in 2013” Heath Ryan, Australian Olympian

Colonial Hot and Handsome is the only Appaloosa in Australia to reach Grand Prix level Dressage.

From day one of Robbie’s journey, in the dressage world, he, his owners and trainers had to jump many hurdles, mainly due to the thinking of some older judges – if it’s not a Warmblood it’s not Dressage Horse.

As Robbie passed through levels and proving his worth he earned their respect and we are so proud to say his breeding is Appaloosa for all the world to hear.

And where is he now?

Robbie is tucked away on a little property in Tarana west of Lithgow NSW, in the bush. He has his own paddock and his own little riding school where he is loved and ridden daily by Wendy Knowsley.

Wendy took over 12 months to buy Robbie, after turning her nose up at the thought of an Appaloosa for dressage as Warmbloods were all that was on her mind. Wendy’s coach Heath Ryan suggested Robbie again, Wendy finally relented and she hasn’t looked back!

“My confidence as a rider has soured…this wonderful horse has a temperament to die for, he is teaching me all of the highest-level dressage movements that I only ever dreamt of doing. He does piraffe, passage and canter pirouettes with ease” Wendy said

And while Wendy’s age is a secret it’s a tad over 50, and at 15 years of age Robbie may just be teaching his last rider through the ropes of Grand Prix.

Congratulations to Colonial Hot and Handsome – Hall of Fame inductee 2017.