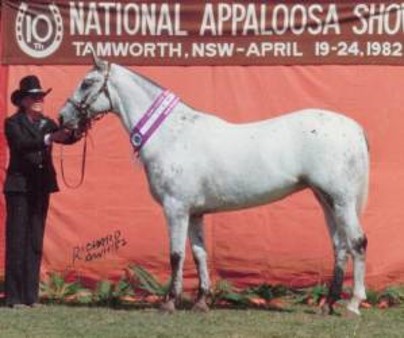 Owned by Lyn Myers and the Myers Family

Pride was born in October 1978, bred by Jack and Harriett Buster of Darling Farms, at Burke. She was purchased as at nine months of age by Lyn Myers of Lynway Stud where she began her incredible show career. Up until her 2 year old year she had been a very successful halter horse taking home numerous Championship titles.

Pride was then broken in by John Kelly and was then trained by Greg Gilpin for the express purpose of being the youth horse for Simon, Justin and Nigel Myers.

To complement these Darling Sun Pride was awarded the Champion Award (No.9) in January 1982 and in October 1982 she was awarded AAA Superior All-Round Horse (No. 3).In obtaining this award Pride was the first mare; the youngest horse and the first Australian bred Appaloosa to reach such an honour.

In the 1982/1983 show year, campaigned exclusively by a then 13 year old Simon, Pride dominated the annual end of year AAA high point awards; winning 36 in total (from halter to every performance event in both her aged group, overall and in two youth divisions) – a feat that has never been matched

Darling Sun Pride had a very special personality; she had a very calm and placid demeanour which allowed for her to be trained in many events at a very early age.Because of this she was not only a wonderful youth horse for the Myers boys but she was also in high demand by the Appaloosa Queen entrants to use as their riding horse in the equitation phase of the competition at the nationals. A wonderful ambassador for the breed who not only was great within her own breed, but was great amongst other western breeds and certainly showcased the versatility and trainability of the Appaloosa to the English cohort as well.

Pride produced a number of foals. Her most successful being the National and State multi-Champion, Lynway Sassy Saint (being by the wonderful imported stallion Joker Be A Saint). Sassy Saint, whilst she was a good show horse also produced good show horses over the years – so the Darling Sun Pride legacy still lives on today.