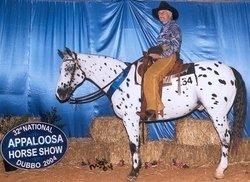 ‘Buster’ was bred by Saxon Wells but carried the Delgany Stud prefix because he was included in their studs branding sequence for 1981. Offered for sale as a weanling colt at the 1982 National Show Sale, he was passed in as his reserve was not attained. On returning home to the stud, he was gelded and kept by Saxon and the rest is history. In his early years, it was said that he would not amount to much but as he continued to win, many tried to buy him, and all offers were refused. Buster lived the whole rest of his life as Saxon’s best friend and loyal companion.

Delgany Shunka Witko was very versatile and aimable, In 1989, he was leant to Deanne Haynes’ for the Appaloosa Nationals Costume Class, after her horse was injured. Considering he had never had such regalia on him he performed with aplomb and won. He was also ridden in quite a few more costume classes by Joanna Richardson.

He received his ROM at Halter no 253 in April 1988 – Bronze Medallion no 119 in November 1989 – Silver Medallion no 106 in November 1992 – he would have had a Gold Medallion if points had been sent and registered early in his career. (He didn’t get his awards as quickly as others because Saxon could not go to as many shows as frequently as they could.)

His other awards include:

He received his Australian Appaloosa Association Champion Certificate no 73 in December 1993 and his Superior All Round Horse award no 43 in May 1997.

He also recorded points in Cutting, Working Cow Horse, Reining and Western Riding – he also did well in Team Penning.

The last National Show that he competed in was 2005.

Other than the show ring he was a great pleasure to ride. He would go anywhere he was asked and when going down the road nothing bothered him, not the largest truck or road maintenance vehicles, he would gather cattle in the roughest country and face off the biggest bull. Put a small child on him and he never put a foot wrong.

The Pearson Family of Middle L Appaloosa Stud in Orange, shared their fond memory of Buster and Saxon:

As a family our fondest memories of Buster are when we were out riding in our arena on a Saturday or Sunday and we would see Saxon and Buster walking, although sometimes jogging or loping up the main road, turn into our driveway, open and close the front gate, with ease of course, and make their way down our driveway for a visit or a ride in the arena. It used to send some of our young horse’s crazy watching this loud leopard jog down the road but Buster never batted an eyelid. These days only ended as Saxon moved and the distance between our places became too far.

Buster unexpectantly passed from a bout of Colic in June 2007.

He was not only a Champion horse, but a loyal life companion who was irreplaceable.