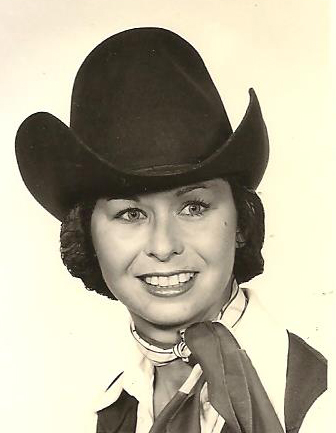 Dianne had been a highly successful competitor in the Sydney show scene from a young age, winning many championships at Agricultural shows and Sydney Royal show and dressage competitions, when a conversation with friend PetaAnne Tenney, led Dianne Copp, in partnership with her Dad Cecil ‘Cec’ Copp, to buy her first Appaloosa, the imported stallion Joker Red Boy, and an amazing partnership was born.

When Joker Red Boy arrived Dianne retrained him in line with her Dressage principles and over the next five years pitted him against some of the best Appaloosa and open competition across four states. This team competed and won at National shows in Shepparton 1976, Toowoomba 1978 & Melbourne 1979 in English Pleasure, Western Pleasure, Western Riding, Indian Costume & also competed and placed in sporting &Working Cowhorse.

The County of Cumberland Quarter Horse Association was one of the toughest western competition arenas in the country and Dianne rode Joker to be the 1977 CCQHA All Round& Performance Champion. The competition wasover ten shows, and included Halter, English & Western Pleasure, Western Riding and Trail events, and at the time was the most richly prized western series in Australia, with Dianne & Joker earning 107.5 points over the series to take out the Overall Championship winning a two horse trailer, an English saddle & a Robin Yates western equitation saddle amongst the prizes.

In 1979 at Australians Quarter Horse World Show, one of the prestige shows of that time, Dianne& Joker won the Open Senior Western Pleasure against the best quarter horses and paints in the country.

Dianne introduced a whole new audience to the Appaloosa breed through the interviews, promotions and articles she did from 1975 to 1982. Writing extensively about Western performance classes and the Appaloosa Breed for Equine publications including the most popular horse magazines of the times, Hoofs & Horns, Australian Western Horseman as well as her western show series for Australian Horse & Rider where Dianne showcased our breed, using photographs of Appaloosas to illustrate western events. Dianne & Red Boy made appearances on two nationally aired television programmes, Horse Talk TV with Suzy Jarret and Simon Townsends Wonder World, which featured the Indian Costume classes and did interviews in the Sunday Advertiser and the national magazine Women’s Day.

With her Dad Cec, Dianne ran the Tilbaroo Equine centre at Glenorie, where she introduced students from mainly hacking and dressage backgrounds to the beauty, versatility and trainability of the Appaloosa Horse.

Dianne is extremely fond of her time within the Appaloosa breed. He end to showing began after the passing of her father Cec and marrying her husband – who wasn’t as much of a horse lover

Di believes the skills she learned from training  horses and competing at shows  especially aiming for hi points, striving for excellence, knowledge, discipline respect and training are transferable to her life after horses and has enabled her to help her sons passion for competitive chess, who is now an International Master and has represented Australia in 2012 as part of the Olympiad chess team and his attendance this year in Norway in only a few months is the reason she was not able to make it tonight.

Dianne and Red Boy were amazing to watch, always competitive amongst the best in Appaloosa and Open competition and truly great ambassadors for our breed.