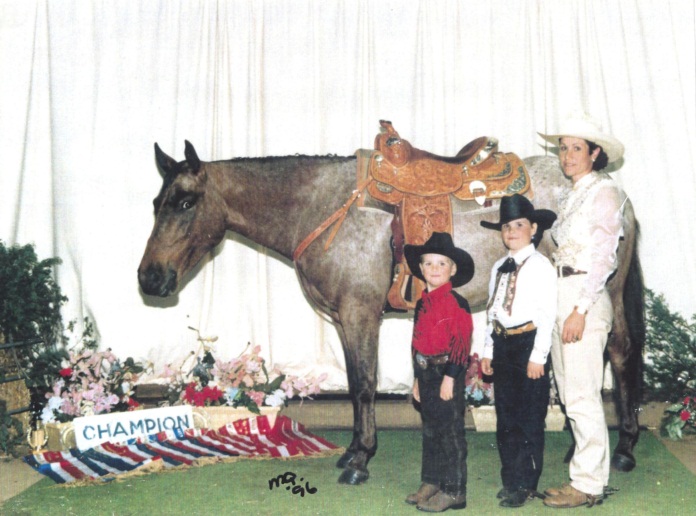 Not just a champion – but family!

On the day Debbie Pearson visited her parent’s Len and Jean Haynesto look at a paddock of mares and foals she certainly wasn’t expecting to meet the filly that would shape the show careers and success of her family.

Double D Suzanna Plaudit, or ‘Suzie’ as she was known, wasborn in 1991 at Double D Appaloosa Stud in Orange NSW, bred by Len and Jean Haynes. Sired by Melville Regal Plaudit out of Imported Mare, Sunday Suex X, from the day she was born, she never stood out for her looks, but there was something about herthat oozed agility and performance.

Suzie soon became part of the Pearson Family and resided at Middle L Appaloosa Stud in Orange NSW, where she was broken in and competed at her first show, the 1993 NSW Appaloosa Championships in the ridden 2yo events and Dressage (2yos were ridden before January back in those days).  Here she won her first trail and preliminary dressage state champions – both events in which she continued to excel in over the next 14 years!

Suzie was only young, but it was easy to see she was a trainable and versatile steed. She also showed any extremely surprising ability to execute the most beautiful lead changes with complete ease whilst she played in the paddock.

At this time Chris Fletcher also lived at Middle L Appaloosa stud as the resident trainer and he started Suzie on the path to a career in reining. She was agile, speedyand able to complete the longest sliding stops and flawless lead changes of any horses her age,  that she was destined to be a reining champion. This was confirmed when she won the 1995 National Appaloosa Championships 3yo Crystal Classic Reining Futurity and her age event. Her reining success continued and Chris and Debbie decided to jazz it up by entering freestyle reining. Many of the members around all those years ago are able to recall the “Tribal Dance” techno routine that Chris and Debbie rode in Indian dress, riding doubles and bareback, that brought down the house and earned her a State and Nationals freestyle champion awards.

During this time, Suzie was put on the market as a reining mare that also excelled at trail, western riding and dressage. Although for reasons unknown after 2 years of trying, no one wanted to purchase her, so withDebbie’s 2 young children Tamara and Tyler coming up the ranks, it was decided that Susie would head back to the show ring as an Amateur and Youth Horse.

At 5 years of age, Suzie slowed down the pace and became one of the most versatile mares of her time.  From dressage and hack, to showmanship, rail classes right through to Reining – Suzie picked up multiple State and National Champions across the board. She soon became the family horse and full credit to this little mare, she taught Tamara and Tyler the foundations of everything they know – She was so patient with the children, forgiving and quite frankly, so talented that she was able to complete the western riding pattern on her own!

How often do you see a 9yo boy riding a 14.2hh mare, with one hand, while the other is broken and strapped up in a sling – competing 4 perfect reining spins and win at a State show- that’s right, never! And only a mare like Suzie could be trusted to do it faultlessly.

Suzie was also an extremely competitive hack horse. With Tamara on board, they attended many an open Hack day in their local area. As we all know, taking a spotty horse out into open company is just asking for trouble. For some reason people seem to think the spotty colour is “scary” to their own horse or that Appaloosas don’t hack – well Suzie sure showed them wrong winning a number of Grand Champion Hacks and Grand Champion Riders – much of this not just on her ability, but her willingness and her respective manner, and on many occasions her lead changes helped too!

She started showing with the whole family seeing Tyler in Leadline, Tamara in Junior Youth and Debbie in Amateur. This was in 1996, by the last season of her show career in 2007, Tyler was a senior youth and Tamara was an Amateur. That is how strong, versatile and competitive she was.

Whilst she was a pleasure to ride, let us be honest, all horses have their quirks and Suzie was definitely in a league of her own. She was the hardest horse to catch, there was no walking up to her in the paddock and throwing a halter on – many a time the kids came back without a horse on the lead – or even with an empty bucket because she had snatched the feed and ran.  Many people would not have put up with how difficult she was to catch or the fact that unless she had a halter on – you could not shift, pull or take a rug on and off at all without the same flight response. As cranky as the kids got when they could not catch her – it was just one small trait to overlook in a world of love that the whole family had for this horse.

Growing up Tamara and Tyler always joked that Suzie was an important member of the family and this was purely determined by the fact that this was the only horse that their dad and Debbie’s Husband, Geoff, ever remembered!

Over her career Suzieearned ROMs in Western Riding, Pleasure, Hack, Dressage, Trail, Bridle Path Hack and Bronze Medallions in Pleasure and Trail. Unfortunately, Susie should have earned many more awards, but Amateur and youth awards do not count towards the horse so the 407 performance points to her name is not a true recognition of her versatility and success.

Towards the end of her career, Suzie suffered a very large bout of colic at a show and was whisked into surgery. Thankfully, to everyone, especially Debbie who literally stood by her side during the whole surgery, she recovered well and returned to the show ring, but reducing her classes to her favourites Dressage, Trail, Reining and Riding.

Suzie went on to produce another gelding and 2 fillies – one of which is Middle L Suepernova – NSW Appaloosa Championship Hi Point Yearling, who is now showing huge potential out in team penning.

Suzie spent that last 18 month of her life blissfully playing boss in the brood mare paddock at Middle L’s new farm, eating grass and enjoying the company of kangaroos and other wildlife. Old age finally caught up with her and after a very gut wrenching decision she was respectfully put to sleep in September 2015, with Debbie, Geoff, Tamara and Tyler by her side.

She now rests where she can still greet the visitors and still keep and eye on everyone at Middle L Appaloosa Stud, just like she did for the 24 successful, fun, loving years she was part of the family.