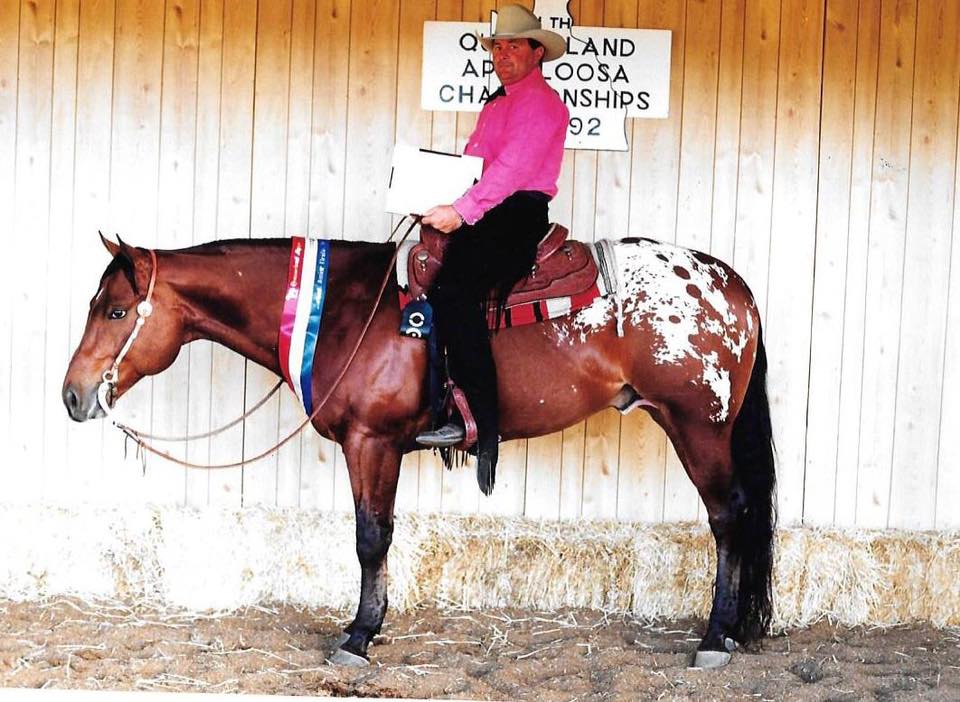 The story of this talented Appaloosa stallion began before he was born….

When Sue met, her later to be husband, Wayne Judge, he was a professional rodeo cowboy, travelling the rodeo scene and kicking up dust in the bulldogging arena.

Over the next few years, Wayne started to see less of the rodeo arena while he spent more time breaking horses and dabbled his hands in training  when the young couple bought a Quarter Horse yearling, Hume Park Hominy Grit, from Hume Park Stud.

As the gelding began training and progress to under saddle, Hume Park Stud closed and a complete dispersal of stock saw the young couple being offered their yearling’s dam; a solid and attractive QH mare Capricorn Lindy Lou.

Like all young trainers, Wayne and Sue were struggling to get their start in the Western Industry, so Wayne quit his rodeo gig and started focusing on training full time. Wayne had the opportunity to train and show  Appaloosa Hall of Fame Stallion Joker Be A Saint (imp), owned by Lyn and Wayne Myers of Brownlow Hill NSW. While in training the Myers sold Joker to a lovely couple, Jean and Jimmy Brooks.

Jean and Jimmy loved what Wayne was doing with Joker and graciously took him and Sue in as resident trainers of Kyliebar Stud, Warnervale NSW. With them, they had their mare Lindy Lou in tow.

Joker was a strong, versatile and highly credentialed stallion, and Sue took no hesitation in breeding their lovely mare Lindy Lou to him the next season.

In October 1987, Lindy Lou foaled a bay colt, graced with a white spotted rump. Welcome to the world, Gest a Saint.

Whilst the colt named “Skip” was just what Sue was looking for, his early days were not easy! The foaling went well but skip became ill. Test and vet care determined he has a rare condition where he was allergic to Lindy Lou’s colostrum, a rare condition know as Neonatal Isoerythrolysis (NI).

NI occurs in a foal if the mother has antibodies against the red blood cell type of the newborn foal. We all know how critical colostrum is to the health of a newborn foal, however in this case ingesting colostrum, the first “mother’s milk” the foal will suckle can be toxic and lead to severe illness and, if untreated, even death.

Although it sounds daunting, Skip was easily treated by being bottle fed. With the help of Jean, Sue was able to milk broodmares owned by the Brook’s and keep skip well fed.

From here he flourished. He was always a gentleman, respectful, quiet and trainable. He was broken in and trained as a 2yo by Wayne, as a late maturer Skip wasn’t shown under saddle ata competitive level until his 3yo year.

Hitting the Western show arena in 1991 as a 3yo, with Wayne on board, they loped their way to being the leading money earning snaffle bit pleasure horse in open futurities. This was braced by their history making win in the $5,000 3yo Futurity at the National Pleasure Horse Association. At the time, this was the richest pleasure futurity in the country, and dominated by the Quarter Horses. Still to this day Skip is one of only 2 Appaloosas to win such prestigious Pleasure futurity awards.

Sue reminisces on this day “I still remember it! It was an unforgettable experience and well deserved. The prizemoney meant so much to Wayne and I, as at the time we were building our own place and barn, around the corner from the Brook’s and Skip’s cheque helped pay for water tanks and installing water to the new barn.”

Skip was only ever owned and shown by Wayne and Sue and was a pleasure to watch throughout his 3 year show career. He was shown in Hunter and Bridle Path Hack events by Sue and the Western events being a Grand Champion Halter Horse and excelling under saddle in Pleasure, Trail, Western Riding. Skip was brilliant Western rider, at home he could nail a bridle less western riding pattern, showing off to anyone who would watch.

In the barn, he was great to look after; he just didn’t like to be pampered. Loved everyone’sattention, but was all about lets ride, do our work and I’mdone –he wasn’t a fan of the brushing, clipping and looking lovely part of shows – but hey what men are!

Out of the show ring, Sue spent a lot of time trail riding. Horses in the training barn were taken out on long ride and while Sue loved the scenery, whenever she rode skip she was always last, slowly tagging back in the distance from the group, which was a testament to his gentle no-fuss nature.

Skip first stood at stud as a 2year old with his first progeny hitting our grass in 1991. Over the next 6 years he produced 36 registered Appaloosas with 70% of his progeny shown and point scoring.

Gest A Saint’s progeny have also gone on to collectively produce 33 foals, with 66 2nd generation being shown and point scoring with the AAA.

One day, Skip wasn’t himself. Wayne was away with his team showing and Sue was caring for a barn of horses. Skip was restless, yet sluggish, not eating and Sue knew immediately she had to get him to the University for help.

Skip was disagnosed with Monolith Stones. Also known as Enteroliths, which are stones that form in the intestinal tract of horses. He was whisked awayon the float to the University of Sydney, where he was operated on to remove the stones. He was given a clean and safe bill of health bit strict instructions of rest and relaxation. For the time of his recovery, he resided at Cedar Brush Farms in Yarramalong NSW.

Unfortunately for Skip, the surgery was tough, and he never truly recovered to his full self, through no lack of trying or anyone who aided his care and recovery.  He loped his way into the heavens at the young age of 8 years in 1998.