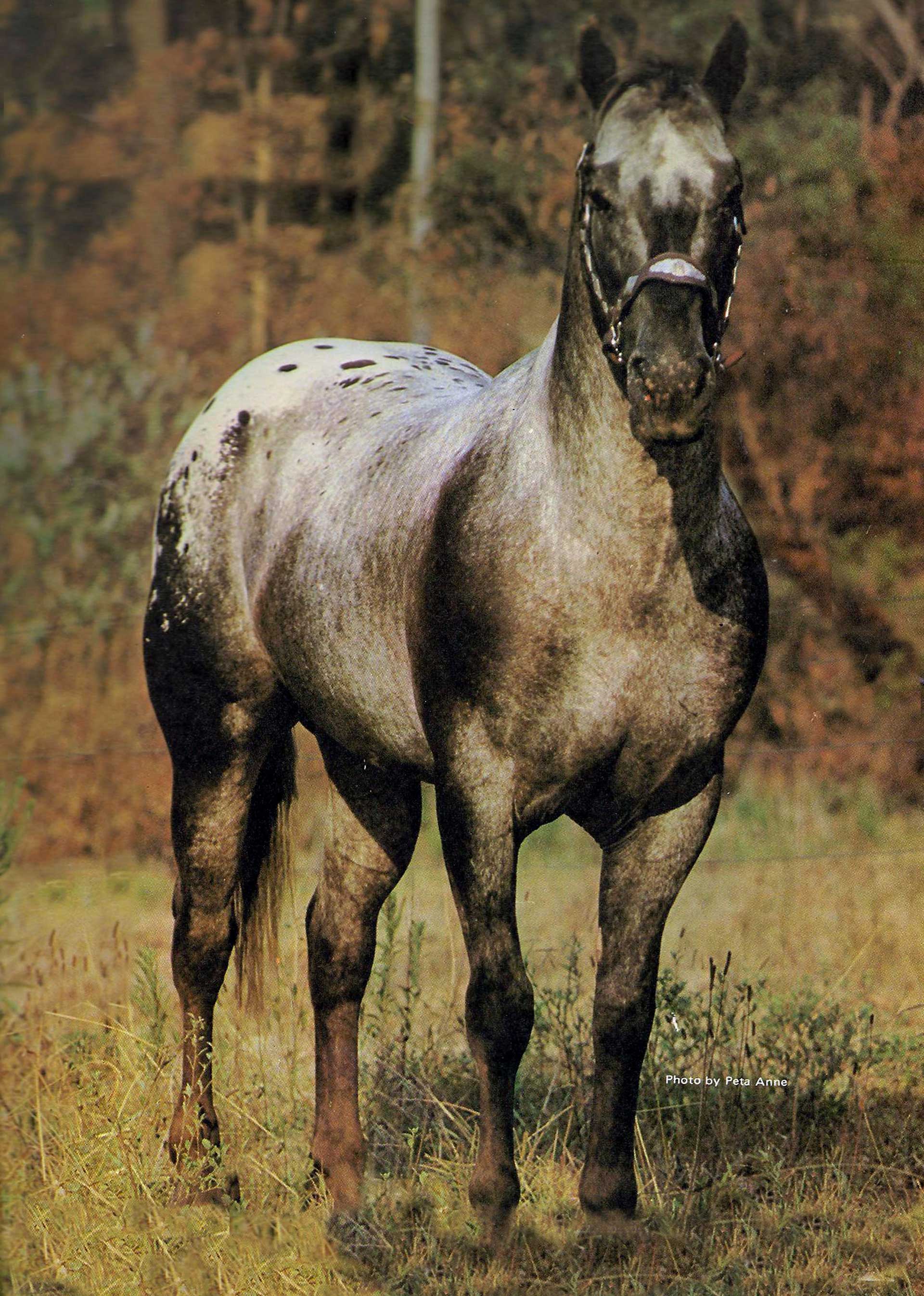 Cecil Copp and his daughter CianneCopp, of Tilbaroo Equine Centre in Sydney Australia, had fallen in love with the Appaloosa and were determined to purchase an American Bred Stallion to import to Australian shores. Working with American Horseman Jim Tenney, Cecil and Dianne determined their wants in a Stallion, and Joker Red Boy was selected on his athleticism and versatility.

‘Red Boy’ made his journey to Australia, finally arriving in late 1974 and a bit worse for wear from the English quarantine. Dianne started showing Red Boy in 1975 and competed as a team right through to 1982.

During this time he was shown extensively in NSW but did at times venture to Queensland, Victoria and as far as South Australia to be the Appaloosa display for a horse expo in 1975.

His trophy cabinet certainly was impressive during his show career, winning  numerous AAA Awards and certificates including AAA Hi Point Performance Horse of Australia in 1977. He has Lifetime Award certificates in Pleasure, English Pleasure, Western Riding and General Performance.

A major highlight in his Australian performance career was winning the 1977 County of Cumberland QuarterHorse Association All Round Champion – this was judged over 10 shows under top QH judges. It included halter and 3 ridden events which Joker Red boy Scored 107.5 across Halter, English, Western Pleasure and Western Riding. Out of this event he won a 2-horse trailer for the All-RoundChampion and to top it off, won an english saddle for Hi Point English Horse and a western saddle for HiPoint Champion Appaloosa! He was the first Appaloosa to win this fantastic award!

A second highlight was he was the first appaloosa to compete in an official Dressage Association Medium competition, where he placed 3rd.

Red Boys Dressage was amazing – He competed at Prix St George Level where he excelled in his 2 stride flying lead changes and canter pirouettes.

He was used many times to promote the Appaloosa breed – at home the students at the Tilbaroo Equine Centre used him to ride, he went too Ag colleges for talks and displays and horsemanship clinics.

Not camera shy, Red Boy had a few stints on TV including Horse talk on ABC in 1979 in a feature on Western Riding, showing interviewer Susan Jarrett his ease of flying changes. And on Steve Townsends Wonder World TV series with Dianne, performing in full Indian costume promoting their heritage of the breed.

One anecdote, and chuckle worthy memory Dianne Copp has of Red Boy; He is a people’s horse – at one event a young guy in his mid-20s, very attractive with a thick head of lustrous hair, stopped to look at Red Boy tied to his stall. As the young man was chatting to Dianne about Appaloosas, Red Boy started sniffing this man and getting rather close – after a few big huffs, Joker flicked his head towards the young man and grabbed his toupee straight from the man’s head! Dianne said she almost died! Seems Red Boy had known all along something wasn’t right with this guy!

Breeding was kept to a minimum at Tilbaroo Equine Centre as it was only on a small 5 acre property, but Red Boy served selected outside mares, mostly producing fillies.

Joker Red Boy unexpectantly died in 1983 from colic at the age of 14. Previously he had never had a sick day, so this was a terrible shock to the Copp Family.His passing also led to the end of Dianne’s horse career – it just wasn’t the same without him…..