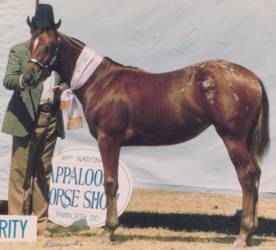 Established in the late 1970’s, Lynway Stud has played an integral part of the AAA history and the Appaloosa Breed in Australia.

Owned and managed by Wanye and Lyn along with their 3 sons Nigel, Simon and Justin, the Myers family had a constant vision to grow and establish the Appaloosa horse as the leading western equine breed in Australia and Lynway Stud became a headline for many of their promotion and breeding endeavours.

A passion for our breed was evident by the volunteer work of the family, led by Wayne who served on the AAA board for 12 years and honoured with a Life Membership for his service.
During the early 1980’s, there were a proportion of members who lobbied for the inclusion of solid colour Appaloosas to be allowed registration. At this time however, the majority of members were against it. After years of debate Wayne proposed and instigated the AB registry for the solid colour horses, this was the start to the way full recognition of solid coloured horses.

In his capacity as a director, Through discussions with the then ApHC director, Jean Klamforth in 1985, Wayne instigated the sending of first Australian Appaloosa youth team to the United States in 1986 to compete at Opportunity ’86 in Columbus, Ohio. .

Lyn and Wayne were inaugural HSAA judges and AAA judges
Lyn prepared horses for their owners such as Jumping Rock Stud to go through western horse auctions. Numerous horses prepared by Lyn received the highest prices at these open western sales.

As exhibitors of many numerous appaloosa horses over many years, Lynway Stud would have earned thousands of points (were they recorded in full) in open and youth events, from halter and showmanship classes, Bridle Path Hack, Western Pleasure, Trail, Reining, Western Riding, Dressage, Hacking to Cow Horse and Sporting events.

Simon, Justin and Nigel Myers were prolific youth competitors also winning at major shows in showmanship to performance and sporting events. They also competed successfully in the Youth Challenge which was held for all youth in western breeds by the County of Cumberland Quarter Horse Association.Simon and Justin along with Michael Gilpin and John Mitchell were winners of the inaugural Regional Clubs youth challenge at the 1983 AAA National Show.

As breeders, Lynway Stud owned and stood some of the most influential Appaloosa Stallions in the History of Appaloosa’s in Australia. These being UNAKA SUN (imp) and JOKER BE A SAINT (imp), offspring of these two sires dominated the highest placings at all the major shows across Australia in all events and their bloodlines are still found in many great breeding and show horses today 30 plus years later.
Other stallions they stood were:

The Lynway prefix was synonymous with good looking, trainable athletes that had quiet demeanours that could be used for youth and open horses.

Through the extensive showing of their appaloosa horses in youth and open events, Lynway Stud encouraged many new people to buy appaloosa’s and become active members of local affiliates and the Australian Appaloosa Association