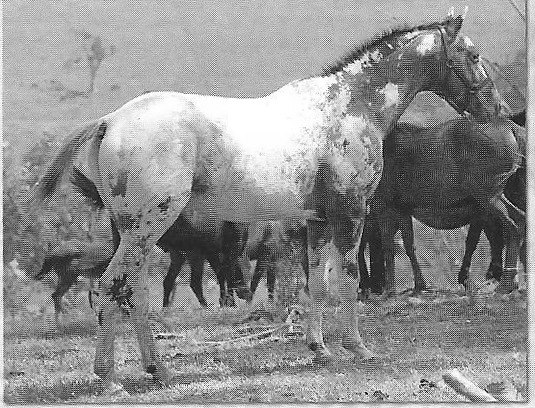 Born 1959, Malhuer Tonka was a load coloured snowcap stallion known as “the exterior decorator” seeing as he produced predominately colour, and for the time this horse was a leading sire in the Appaloosa industry, colour is what it was all about!

As an aged stallion he was imported by the late Denton Hughes in late 1967 and stood his first season with full bookings at stud with Denton in 1968 in Grafton NSW. In the years to followMalhuer Tonka was purchased by Sam Hordern of Colony Stud in Scone, and he stood at Colony and Rebel studs.

In 1974, Tonka was sold privately for an undisclosed 5 figure sum at the Rebel stud production sale at Peak Crossing that April. He was purchased by Ken Sharp and was relocated to Rangeview, an 809 ha cattle and horse stud, managed by a former Elders GM. The stud was also home to thoroughbred stallion ‘Park Avenue”

He is one of very few Indian reservation bred Appaloosas in Australia with an all Appaloosa pedigree spanning 5 generations. He is by Lawyers Acro out of Malhuer Donna.

He was the sire of many registered Appaloosas including Rolling G pepe, Cherokee Tonka and Holy Smoke