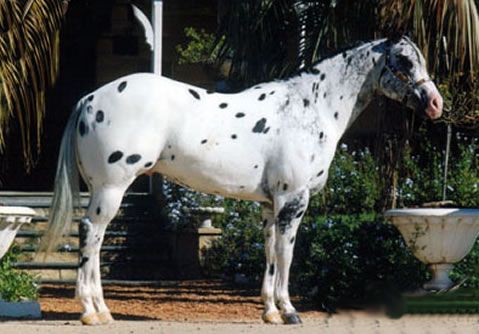 Mega Dream was born in the middle of a blizzard in the USA in 1989. A bay leopard, he grew to stand 15.3hh. Shown in the USA, he stood 3rd as a weanling and 4th as a yearling at the World Championships, 4th at the US Nationals and achieved his ROM at Halter. Once in Australia he was never shown again, preferring to let his progeny do the talking.

He was imported to Australia as a 2yr old, by Margaret & Mark O’Brien, Bill & Cathy Smith and Arthur & Elva Hiscock. He has always stood at Ashfield Stud, based in Queensland.

Mega is sired by what many believe to be the most influential sire in the Appaloosa breed; Dreamfinder(USA). He is from the mare My Little Margie (sire The Executive) known for producing exceptional progeny. Both sire and dam are inductees into the ApHC’s Hall of Fame.

Mega has sired eight AAA National Supreme Halter exhibits, with Ashfield Dream’n Boots and I’m A Classic Dream wining the event twice. He has progeny that have achieved National Hi Point awards at Halter and Performance and he currently has 64 progeny that are National Champions.

Nine of his colt progenies have gone on to become stallions in their own rights with progeny that are champions at halter and/or under saddle. It is with great pride Mega Dream is inducted into the AAA Ltd’s Hall of Fame.