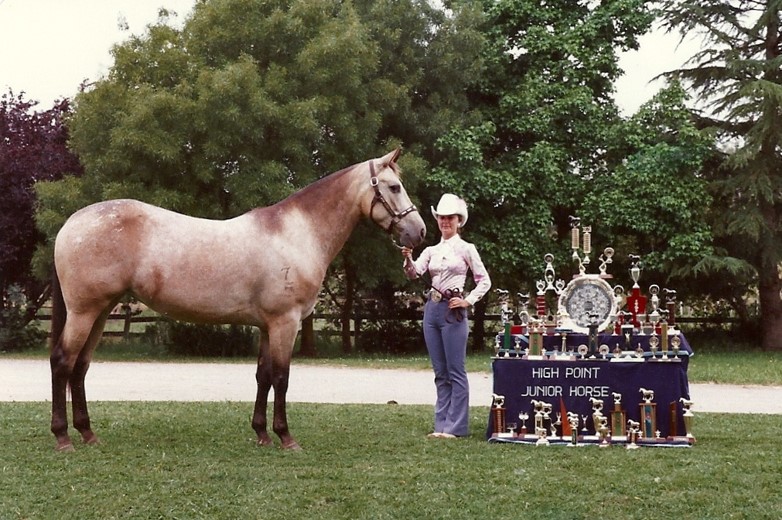 Born in 1975, Nevada Peavys Bambi was bred by Noel and Helen Cook at their family’s stud, Running N Ranch.

As a weanling, she was graciously given to their daughter Sue Polizos (nee Cook) as a Christmas present. A then 17yr old Sue started the filly’s show career successfully competing in halter events.

Trained and broken by Sue, Nevada Peavys Bambi became more of a success in the show ring. Competing in Western Pleasure, Trail, Western Riding and Bridle Path Hack, this mare proved herself to be a great all-rounder, winning many State and National Titles in open events.

Over her 5-year show career this mare won numerous Hi Point awards at State and National level, her greatest honour was to receive AAA Champion Number 2. She was the first Mare ever to win this prestigious award.

Nevada Peavys Bambi was a reliable, willing and quite mare. This proved her to be a competitive youth horse, being shown in youth events including Showmanship by Cameron Horden. She was also shown on occasion by other youth and used to teach children to ride.

Mares were very important in those days as they were the foundation of our breed; many mares were bred rather than shown. With her great breeding and her outstanding success in the show ring this mare was retired early as a 5-year-old to become a broodmare. She went on to produce horses that proved the versatility of the Appaloosa, as many of her progeny went out to be great all-round youth horses.

Nevada Peavys Bambi lived her whole life with Sue and passed away at the age of 22yrs.