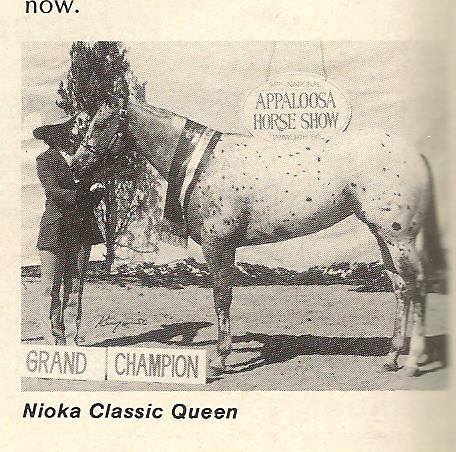 Foaled at Arthur & Elva Hiscocks’ Nioka Stud in Oakey Queensland in 1983 by Princes Tyson out of Ms Boucher by the imported TB “Boucher” and campaigned by Vicki Morrow “Queen” won the Grand Champion Mare at the Appaloosa National show and was the runner up high point 2yr old Western Pleasure horse for her 2yr old show year.

Purchased by Carolyn McDowell as a rising 5 year old and bred to a great variety of stallions she has produced National halter and ridden champions including the multi Supreme Exhibit, I’m A Classic Dream who stood 7 years out of 8 in the Supreme line-up at the National Appaloosa Show, also winning the most prestigious halter event in the country being the Australian Halter Showcase Yearling futurity.  As a 2yr old was unbeaten in every futurity entered including the NPHA.

Gest a Classic a chestnut gelding, campaigned by Wayne Judge had 275.5 points and won at all the major futurities in pleasure and hunter and still was a grand champion in halter.

Louie De Loper the only coloured colt she threw, by Im A Cool Seeker has 310 points and multi age group National and State Hi Point Awards and open company champion, campaigned by RaleneGilboy as trainer and owner Anne Brooksbank.

And last but not the least is:-

My Classic Queen, a leopard filly winning the Supreme Exhibit AAAA Hi Point Award as a weanling and winning the overall AAAA Hi Point Halter Exhibit award for that year and a full sister to I’m A Classic Dream (a bay colt), and is now owned by Grant Ford.

A truly worthy recipient of this award, “Nioka Classic Queen”, has given many people the opportunity to be successful with a multi progeny point score of over 2147 points missed greatly but greatly loved.