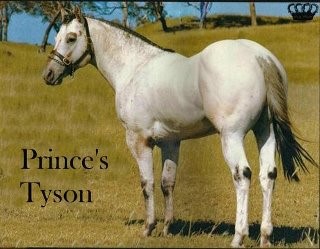 Prince’s Tyson was foaled on April 4, 1971 and was bred by Carl Miles in Texas, USA, owner of his sire Prince Plaudit. Dam was Traveller’s First Star

Before being imported into Australian by Arthur & Elva Hiscock, Tyson was bred to several mares in the US and this progeny went on to become top winning halter & performance horses.

In early 1977, after spending 6 months travelling via the UK, Tyson landed at Nioka Appaloosa Stud in Oakey, QLD only slightly worse for wear. His first foal crop in Australia produced a number of show winners, starting the trend that was to continue on for many years. Tyson’s progeny topped many classes and were awarded for this by gaining 2 Superior All Round Horses, 7 AAA Champions and 23+ National Champions. He won Get of Sire at the National Show in 1981 & 1982 and also won the National Futurity Sire 6 or 7 times.

At the time of his death in 1984, he was the number one Sire of Halter and Performance horses at the County or Cumberland Quarter Horse Association Sires Classic Futurity in Australia. When you consider that most of the nominated stallions were Quarter Horses, it was a great result for an Appaloosa.

Due to the dedication of many breeders and exhibitors over the years, Tyson’s memory will be sure to live on. The efforts of all those involved have been much appreciated.
Sired foals in Australia for only 8 seasons & with only 79 progeny produced:

23 or more of these 79 progeny are National Title earners.

Apart from the above, probably his greatest contribution was his daughters.  In his era and for many years following his untimely death he was almost certainly the greatest broodmare sire for this breed.