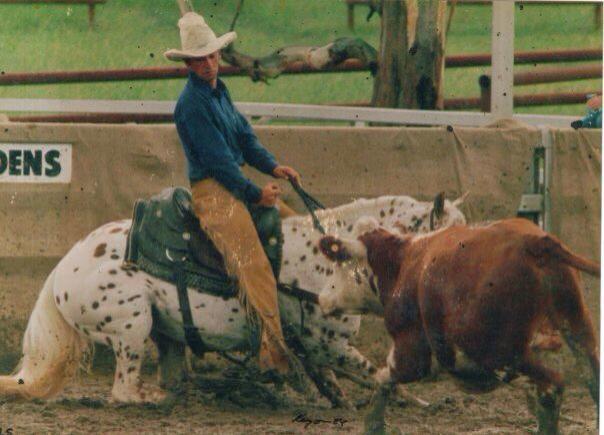 Ric O’Lena was a talented horse right from the beginning. Bred and broken in by Rick DeSave, his reins were handed over to trainer Bryan Cadden just 5 weeks before his first cutting futurity. This was the beginning of his extremely successful show career, specialising in cutting.

Ric O‘Lena hit the big time in 1985 taking equal champion in the Open Cutting and winning the Open Non-Pro Cutting at the NCHA National Cutting Finals. He won many titles over that season and received NCHA’s Certificate of Achievement and finished in the top 10 overall Open Cutting Horses of Australia.

During his career he was awarded his NCHA Superior Cutting Horse award and earned his owner Rick the Runner Up Open Non Pro Rider of Australia.

After that Ric O’Lena expanded his talents into other disciiplines and earned his AAA Register Of Merit in General Performance through Trail,  Halter, Pleasure,  Bridle Path Hack and Reining

He produced many AAA State and National Champions as well as open competition winners and place getters across events like Halter, Cutting, Dressage, Reining, Campdrafting, Barrels and more. Many of his progeny including Crystal Ric, CayusaChatta Lena, CayuseBlazzardO’Lena  and The Cutting Edge have gone on to produce many champions of their own.

Ric O’Lena spent many years at stud for Rick and ConeenDeSave and spent the last 7 years of his life living with Sam and Vince McAuliffe at Cayuse Stud. He passed away in 2010 at the age of 32.