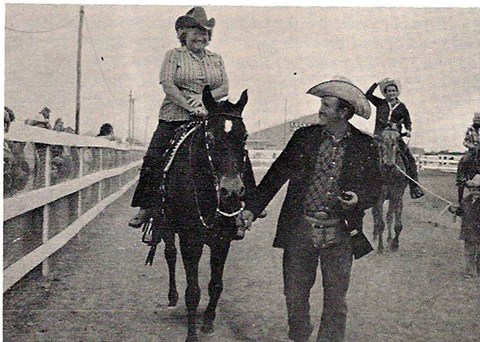 Running N Ranch began its operations in 1968, based in Nathalia NSW and was home to many Appaloosa and Quarter Horse stallions at stud.

Running N Ranch was owned and managed by Noel and Helen Cook, both foundation members and Hall of Fame inductees of the AAA.

In 1969, Lucky Dash Jnr was imported by Running N and around this time Helen began thinking of putting together an Appaloosa Club. Whilst people thought it was to early, she went ahead and purchased six books of service certificates, 2 for each stallion they had. If it wasn’t for these books, there would have been no way of tracing the first mare bred.

Two years later Helen called a meeting in 1971 at Nathalia, with a constitution drawn up to establish aclub to keep records and on the 13th of February 1971 the Australian Appaloosa Association was born.

Noel was elected the first President and Helen the first Secretary of the association, along with Elizabeth Hobson to form the Executive. Noel proceeded to hold the Presidenttitle seven times from 71 to 77 and re elected 85 to 86. Helen was instrumental in providing a constitution, a Rule Book and the first Stud Book for the Association.

In 1972, Helen began organising the first Appaloosa National Show, held in Shepparton on the 27th January 2973.

During the next 10 years, Noel and Helen travelled to America and imported many Appaloosa Horses for Running N Ranch and other Australian parties.

They showed many horses and won many Australian National awards including the first Hi Point National Performance Sire with Nevada Devil Dancer.

They imported the 1st mare registered with the AAA, Thumbelina, along with many more.

He was the first AAA horse to receive his all roundSuperior award and the first horse inducted in to the AAA Hall of Fame. He was show extensively by Helen and Noels Daughter, Sue Polzios (nee Cook).

By this time, Running N Ranch was breeding 65 broodmares out of approx. 120 breeders on the property.

By 1976, Running N Ranch had imported over 200 horses into Australia, making them the 2nd largest importer on horses into this country.

Running N Ranch held many sales and Auctions on their property, with people coming from across the country and NZ to view and purchase some of the most wanted Appaloosas in the country.

One years, during an outbreak of Murray Valley Encephalitis, a sale was held regardless. It was one of the largest yet and horses sold for amazing figures including : Moon Sample for $34,000, Snow Fury for $36,000 and Nevada Devil Dancer for $20,000.