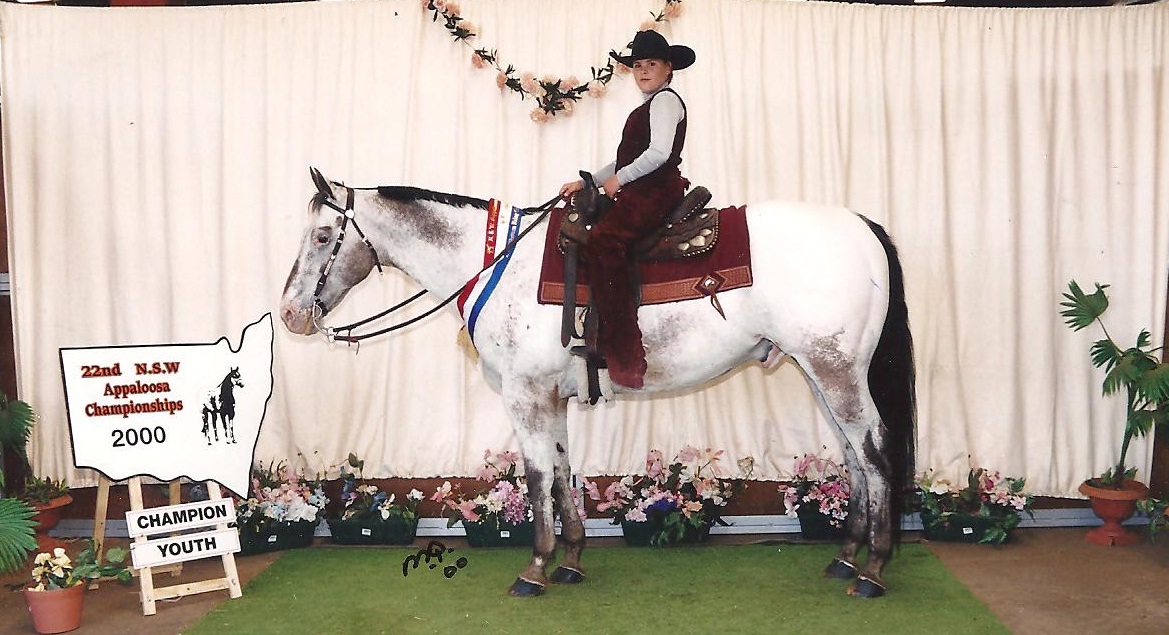 Son of a Saint was bred by L Host, sired by Joker Be A Saint out of Dam Terry Mccue and was purchased by Sue Judge as a Yearling Colt.‘Junior’ as he was named, was soon gelded and first shown as a yearling in Halter by Wayne Judge.

At 2 years of Age Junior was broken in & trained by Wayne. He was taught all disciplines, but mainly competed in Halter, Western Pleasure and Western Riding. During 1987, he competed at Victorian State Show in Bendigo and his First Appaloosa Nationals Championships show was in 1986.

In late 1986, Junior was purchased by Tony Warwick. Tony progressed with his show career with Trainer Greg Gilpin. Junior lived with Greg in Bowral NSW. Tony would travel to Greg’s every weekend for a ride and to compete at the Sydney Regional Appaloosa shows at Albion Park.

Tony showed Junior over the next 3 years successfully competingat State and National Level across many disciplines, mainly Western Events but excelling in Western Riding. Junior was one of the best lead changers of his time. He has won Western Ridingin all age groups including Amateur and Youth during his long show career.

Junior gained win after win and earned himself AAA Champion number 42 in 1990. He has also been awarded with Register of Merits in Western Riding and Bridle Path Hack, Bronze Medallion in Western Pleasure and Gold Medallion in Halter. He also contributed to many Hi Point awards in Open, Youth and Amateur.

Junior was shown by Tony’s wife Deanne 1996 when she was crowned the Australian Appaloosa Queen.

In 1999, Junior came out of early retirement to become a youth horse. Tony graciously offered Junior to his niece, Tamara Pearson, as  her and her brother Tyler were starting to compete against each other in youth events, which was seeming difficult as they rode the one horse!

Still staying in the family, Junior moved to his new home at Middle L Appaloosa Stud in Orange NSW. By the 2000 National, he had taught Tamara a lot, even though he was very push button, especially when it came to his flying lead changes.

Over the next 3 years Tamara rode Junior in Youth and Senior Horse events at State, National and Regional Level. We also dabbled in a local Gymkhana and a few Hack Shows. We won many Hi Point awards, a Hi Point Youth of Australia and his efforts contributed towards her AAA Youth Versatility Award # 9.

By 2002 Junior was again set for a retirement at the age of 18. Sitting in a paddock wasn’t really Junior’s thing though, he always loved the attention, and when those little ears of his are pricked watching you over the gate,it’sto hard to leave a horse in the paddock.

Not long after we were approached by a local mother & friend with a daughter wanting to compete at local Hack &low level jumping events. Junior was leant to this little girl, but before long he was home again. The pair didn’t get along to well and she had changed her mind. I still hold the opinion Junior didn’t like the idea and wanted to come home and be a western horse!

Again, he remained part of the family and spent time moving around our farm, keeping all sorts of animals company from cows, goats, donkeys and other horses. He would occasionally come out for rides on beginner clinic days held for the Orange Regional Appaloosa Club and Tamara’s friends.

For a long time, Annie and Ben Field had been friends of the family. Annie had a keen interest in horses and has her little boy grew up; he developed his own interest in being a “Cowboy”.

As Ben grew, so did his interest and confidence. After months of trying to find Ben a horse to begin Walk & Jog events it dawned on them….Junior!Not being sure who was more excited, Ben that he had a horse or Junior who had no issue with being washed, rugged, shod, primped and preened to get him back into show condition. Most of all Junior got used to the idea of regular feeds, not like he needed it though, he may have been getting on in years, but he has always held great body condition.

By now it was late 2011 and Ben &Junior started competing in the show ring starting at club level.In October 2011 Junior and Ben competed at the NSW Appaloosa State Show. Ben rode Junior in Youth Walk/Jog 13 years &underclasses. Junior was the ripe age of 27! This wasjunior’s first big outing in years and proved he still had it helping Ben win his first buckle for Hi Point Youth walk/Jog.

Junior was enjoying his Youth lifestyle, unlike years before when I rode him, his life was much easier now. Hisshows consisted of 4 whole classes,a short ride here or there and lots of food. At home he enjoyed his own weeks and worked hard for Ben on the weekends, and occasionally enjoying a ridein the paddock to chase the cows.Junior really enjoys the slow life.

The year 2012 saw Junior compete at the 40th National Show. This was a whole 26 years from his first Nationals as a yearling! Showing in all walk&jog events and winning the Youth Walk/Jog Western Pleasure.

While the years have passed by, Junior always kept up great condition and has always had the best of care. With his age though, he developed a small growth on his long soft palette that occasionally becomes irritated in very dusty conditions and he will make a gruff noise. But with regulated light work and watching his food intake it doesn’t incur any risks to his breathing. He also hada cancer on his left eye, which is regularly treated.

Junior’s last show was the 2012 NSW Appaloosa State Show. Ben & Junior made a great team a finished his show career winning HI Point Youth 13yrs & Under Walk jog of Australia and of NSW.

He hit retirement for the final time, in luxury at Middle L Appaloosa Stud. Junior was respectfully put to sleep at 29 years of age, when time finally caught up with him. What a life he lived!