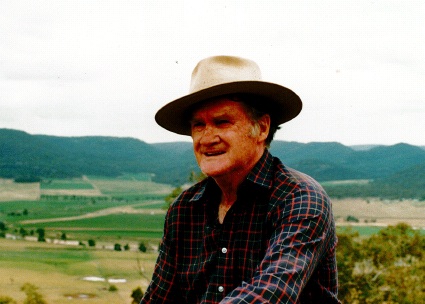 Ted Hodges started his lifetime journey by leaving home at the age of 15. Ted had applied for a job through “Hoofs and Horns” as a jackaroo on a central Queensland cattle property. But as fate would have it, he hopped of the train at the wrong station and ended up working at Lucky Downs Station, located on the Burdekin River. The Station was owned by the Atkinson family and Ted developed lifetime friendships with the Atkinsons and the Jackaroos who worked the property.

Ted had many, many jobs but eventually developed a successful career in the automotive industry as well as being a successful property developer.

In 1971 he purchased a property called the “The Willows” near Scone NSW with the intention of setting up a Hereford stud. But after Quarter Horse/Appaloosa sales at Colony Stud, Parkville, he decided he would bring horse breeding into the mix as well. This was the beginning of Willow Park Stud

As well as running Willow Park and all that involved, Ted took a huge interest in the show circuit and made sure he also had teams of horses competing in major events and worked hard to promote the breed. He participated in judging animals at shows and would travel the country classifying horses for the Association. He also did a stint as President of the Association for several years.

There was never a dull moment at Willow Park. Teds wife still remarks on the thunderous racket resounding around the hills when the he would drive the mares from the back paddocks of Willow Park, over the hill and down to the stables. This would happen several times a week during the breeding season.

The technique was, Ted would saddle up one of the stallions, eitherJokers Monte, Money Creek Jaguar or Swanlake Comanche King. He would ride off over to the back of Willow Park, open the top gate, ride down to the mob of mares and crack the whip. The mares knew what was on and all hell would break loose. They knew whoever got to the breeding yards first, got first chop at the hay. All the stallion could think of was the next jump he was going to get at the end of the ride. Never mind the poor bugger sitting on top of the horse. At the end of the day the procedure was reversed. Needless to say, when the mares went back through the top gate the stallion would take some convincing it was time to turn back. This routine was kept up for the early part of the spring, and then the stallions would be turned out with their respective bands of mares to finish off the season.

A memorable incident was when Ted decided he would go to check on Money Creeks Jaguar who was out with his mares. Ted thought he would toddle over on Jokers Monte, so off he went. Two hours later Ted came back looking a little shaken and a bit worse for wear. Turns out, he had ridden into the paddock where Jag’s mares were, astride old Monte, only to be confronted by the younger stallion, Money Creek’s Jaguar. Before the old man realised his mistake, he was in the middle of a stallion fight. When he relayed the story to his wife, all she could say was “what did you expect, you silly old bugger?”

Ted is now in his eighties and is quite frail, but he still takes an interest in anything to do with the land, its people and its horses. Willow Park, under new ownership, continues these days as a boutique thoroughbred breeding complex, known for its high quality yearlings. Ted’s Grandson Nick also has an “eye” for a good horse and is a principal player in the family property “Riversdale” and the renowned Southern Cross Breeders Group. Joker’s Monte passed away in retirement at Riversdale Farm and is buried there.