History of the Appaloosa

History of the Appaloosa

The spotted horse, later known as the Appaloosa, trace back through the pages of history. The first evidence of images of the spotted horse were found in 20-thousand-year-old paintings in France, proving the Appaloosa has graced the pages of history across the globe. Horses with Appaloosa coat patterns have been depicted in art throughout history, and across ancient Europe and Asia.

The Appaloosa was the most valuable horse in the ancient world, and he was regarded as the most beautiful horse alive. Some were spotted like a leopard or as golden as a newly minted coin. Others were red and blue roan with darker colour in the roan. Alexander of Macedon on his conquest of Asia (329 BC) detoured through Ferghana specifically to secure these war horses prized for their courage, tough hooves and endurance.

Appaloosa coloured horses spread throughout Asia, Europe, Russia and England and eventually to America with invading armies, traders and as special gifts to Kings and nobility. Even the English thoroughbred studbooks list several stallions descended from spotted horses. 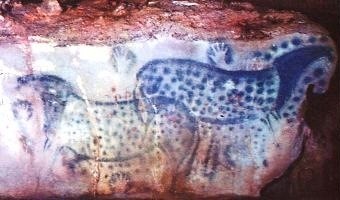 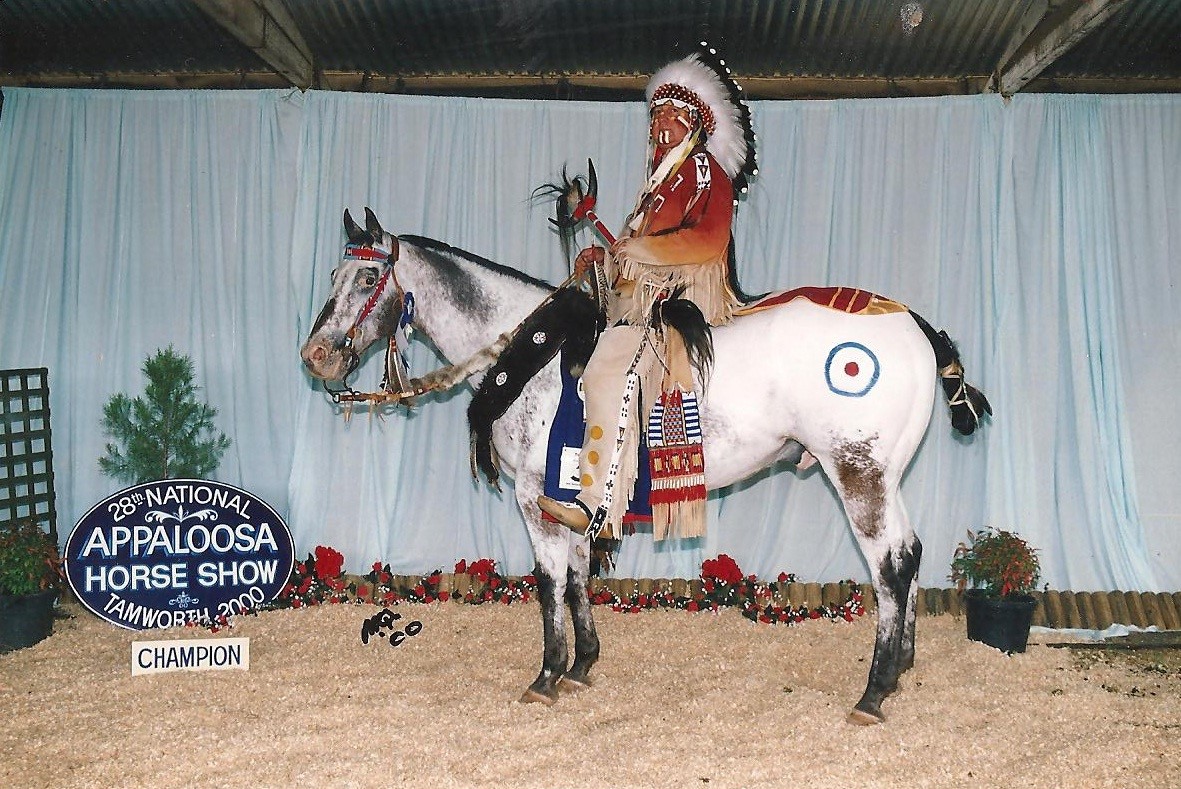 The Spanish Conquistadors took spotted horses when they blazed a trail through Mexico and South America. Quickly the spotted horse spread northward until most of the Indian populations were using horses by around 1700. Once they were introduced to America the Appaloosa horse began what was arguably their most famous period, as horses prized by the Nez Perce Indians.

The name Appaloosa is a variation of the Indian name for these horses – “Palouse Horse”, named after a river in Idaho, USA. Although one can’t credit the Nez Perce Indian with the ‘establishment’ of this breed, one can say they certainly improved and developed through a strict breeding program, a versatile hunting horse of no equal. A war-horse with an iron heart. that was conditioned to have unlimited speed, stamina and remain calm under the worst conditions.

In 1877, “Chief Joseph” Hin-mah-too-yah-lat-kekt (1840-1904), led several hundred of his people to seek asylum in Canada. For over three months, the band of about 700, fewer than 200 of who were warriors, fought 2,000 U.S. soldiers and Indian auxiliaries in four major battles and numerous skirmishes. The tribe mounted on their Appaloosa horses, out ran the U.S. Cavalry through rough mountainous terrain for 1400 miles. The Appaloosa carried men, women and children with all their meagre belongings over trails that led to over 7200 feet in the mountains, through treacherous rivers and deep gorges. They travelled in freezing conditions, and many loyal Appaloosas lost their lives in this game of cat and mouse with the US cavalry. Finally, on October 5, 1877, in northern Montana, just 40 miles short of refuge in Canada, the Nez Perce; sick injured and exhausted, negotiated surrender. After looking at his starving tribe and exhausted horses, Chief Joseph delivered his famous speech that ends, “Now hear me, oh my chiefs. I am tired. My heart is sick and sad. From where the sun now stands, I will fight no more forever.”

After the Nez Perce surrender, they were banished to life on a reservation and the great war-horse, the Appaloosa, was confiscated and sold in a government auction at Fort Keogh. Those not sent to auction were shot. Stories tell of hundreds of horses herded into canyons and dying in a blaze of rifle fire from US soldiers. It is said the bidding at the auction was brisk. The courage of the Appaloosas had become public knowledge via the newspapers and telegraph, and they were sold far and wide, and the great war hose was almost lost.

Return of the Appaloosa

Mr. Claude Thompson had a life- long passion for the Appaloosa, its history and its future. On December 30th, 1938 Mr. Thompson and Dr Francis Haines formally opened the Appaloosa Horse Club in the United State of America.

They, along with other like-minded horsemen sought to save and re-establish the Appaloosa to its former glory. They sought spotted horses from far and wide, infusing them with the pure blood of the Arabian to re-establish the refinement and quality that had been lost due to indiscriminate breeding.

Through the efforts of these men, and those who followed them, the Appaloosa again rose in popularity to once again become one of the most desired breeds of horse in the world today. There are now Appaloosa clubs and registries in Austria, Belgium, Brazil, Canada, Chile, Czech Republic, Denmark, France, Germany, Holland, Israel, Italy, Mexico, New Zealand, South Africa, Spain, Sweden, Switzerland, the United Kingdom, and of course, Australia.

The Appaloosa is truly an ‘International Breed’.

Davis, Beverly Burris. They hunted tigers : a history of the Nisean Warhorse and its descendents. http://www.horseoftheamericas.com/TheyHuntedTigers.htm

Northey, T. and Crosby, J. The Early years of the Appaloosa in Australia. [Photostat copy]