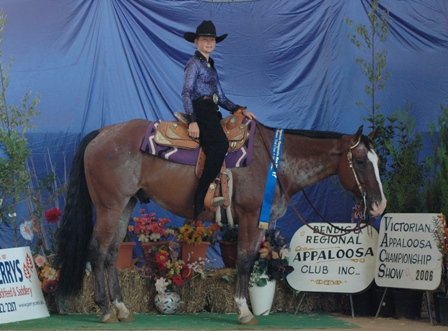 As an AAA Ltd Superior All Round horse and Honour Role Inductee, TS Docs Classic Piece, a.k.a ‘Adam’ was not only a success in the show ring, he was the much-loved show horse for more than one, not two but 4 families…

Adam began his show career in weanling halter travelling to NSW, QLD & VIC State Shows. From this young age and right through to a Senior Gelding classes, Adam was racked up multiple state National champions and grand champion halter awards, even with his small little quirk of sticking his tongue out of the side of his mouth in the middle of the class – Thank god it never stopping him winning!

In 1995, Adam was tall and strong enough to begin breaking under saddle, still a yearling, he was taken slowly and first ridden by John Hennessey around a few small circles. It was easy to see Adam was taking it all in his stride and it wasn’t long before Meaghan had told John to get off and let her have a turn!

From here, Adam never looked back! He never had a professional trainer ride him through his show career with Meaghan. He was very easy to train, and his first show wasthe 1996 AAA Ltd National Show coming home with a Reserve Champion 2yo Western Pleasure and the 2yo Western Pleasure Futurity.

A career highlight for Meaghan was showing him in the 3yo Western Pleasure Futurity in Dubbo in 1997, at the National Halter Horse show they held, it was her best ride they had together and won above all the trainers. One ride she won’t ever forget!

Adam was very trainable and very talented, and as a Junior horse he was the first horse Meaghan had ever trained herself to lead change. He continued to excel at Western Riding events at all levels. Trail was also Adam’s forte.

Meaghan and TS Docs Classic Piece really set the scene for versatility and talent in the AAA Ltd and open show arenas, and by 1997 (4yo) they had achieved his AAA Ltd Champion and Superior All-Round Horse Awards, a plethora of state and National champions in Amateur and open events as well as AAA Ltd Hi Point awards including AAA Ltd 1994/1995 2yrs & Under Halter Gelding of Australia and 1996/1997 Hi Point Amateur Junior Horse of Australia.

In 1997, it was time to Adam to take a new journey in life as a youth horse and Kendall Brouggy, aged 8 years started riding and showing. Adam and Kendall just clicked and by 1999, the Brouggy Family had purchased him.

The Kendall and Adam team went on to win countess state and national champions and AAA awards, but also extended Adam’s showing calendar with amounts of success in Open Dressage and Pony Club competitions!

One highlight from Kendall’s career was finalling in the prestigious Appaloosa National Championships Show Champagne Western Pleasure with Adam – Kendall was only 12 years old!

Adam was a family horse, who was also shown by Karen Brouggy in Amateur events. At the 2000 AAA Ltd Nationals they took out Hi Point Amateur Senior and Amateur Limited.

As Kendall made the decisions to continue her studies, she made a very hard decision to part with Adam, in the hope another youth could enjoy him the way she did.

In 2004, Adams journey continued down south as he was purchased by the Freeman Family as a Youth mount for Jessie Freeman. In 3 short seasons, Jessie and Adam has achieved AAA Ltd Overall Performance Horse and Hi Point Senior Horse of Australia in 2004/5, 2005/6 as well as Hi Point Performance Horse of South Australia. All from Open events

During these three years Jessie was Adam’s only rider, both aged 10 when Adam came into their lives. Jessie and Adam had an amazing bond and the fact that a Junior youth rode this horse without a trainer is a testament to his nature and talent. Something we all know Adam had from the beginning.

Due to unfortunate events, Jessie and Karen had to make the heartbreaking decision to part with Adam, and an offer was made for him to join a new family of youth.

The Higgins Families proudest Adam moment was at the SA State Championships where the whole family showed rode; Senior Youth with Kayla, Youth Walk & Jog with Meg and Youth Leadline with Jordan, proving he was not just a horse but a member of the family!

TS Docs Classic Piece was a testament to the Appaloosa breed, he showcased trainability, talent, versatility and was a true gentleman. He was very lucky to be a member of not one but 4 families and the gentle giant to many little girls who had their dreams filled of a beautiful big horse to love and show!