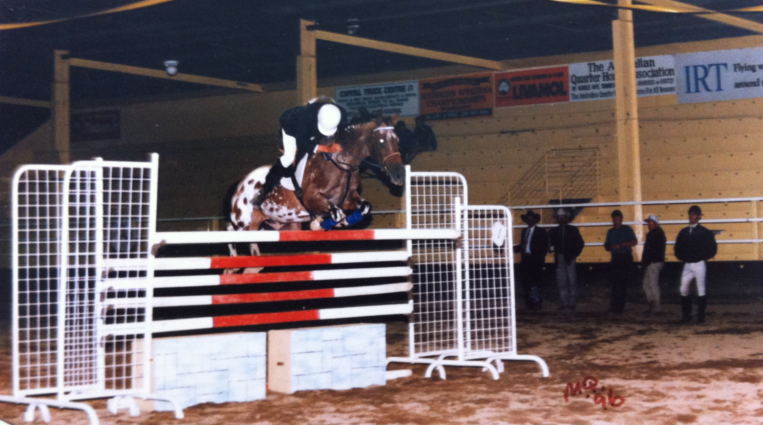 Born in October 1984, Warrior Joe was bred by Ray & Lyn Briskey & family of ToowoombaHis sire, CochiseCommanchieand his Dam, Weona’s Pride. Warrior Joe was broken in at the age of 2 and before his show days began – he was used to go mustering cattle at the local quarry for family friends.

Allan and Darryl Briskey started ‘Joe’ in his career of show jumping. Allan and Darryl both rode Joe in Youth and Open show jumping classes at the QLD, NSW and VIC State shows as well as the Appaloosa Nationals. But Joe’s career also included jumping as an EFA registered horse in open company.

People use to laugh and say, ‘Here comes that kid on that spotty thing.’ Well that spotty thing just beat you! No longer was he the “butt” of the jokes as the spotty thing started winning all over the place. Now people were saying “Oh no, the Briskey’s and Warrior Joe are here!!”

Joe could turn mid-air and the other riders could not believe his agility to not only jump the fence but to clear the jump and already be half turning in the air ready to land and take off the other direction.

Joe was an EFA “A” Grade jumper and made it to this level very quickly in open company. Joe competed in countless Championships, Nationals, Grand Prix’s and Six Bar Jumping events.

Joe’s highest jump ever was at the display jumping night at the Appaloosa Nationals where the American Judges could not believe an Appaloosa could jump higher than they were tall. 6ft 3″ was the highest this 15.2hand high gelding successfully cleared on numerous occasions.

Warrior Joe was not only a horse that could jump amongst its own breed but also made Appaloosa’s a force to be reckon with in the Open Show Jumping Arenas around Australia. Joe received Sapphire, Diamond and Platinum awards for Show jumping with numerous ROM’s and other certificates.

Warrior Joe retired from open show jumping at the age of 19.

This superb horse has spent recent years helping a young bullied child learn confidence and how to show jump. He won six junior Championships in 2010 – 2011. This kid has gone from zero to hero. And this kid’s hero is called ‘Warrior Joe’.