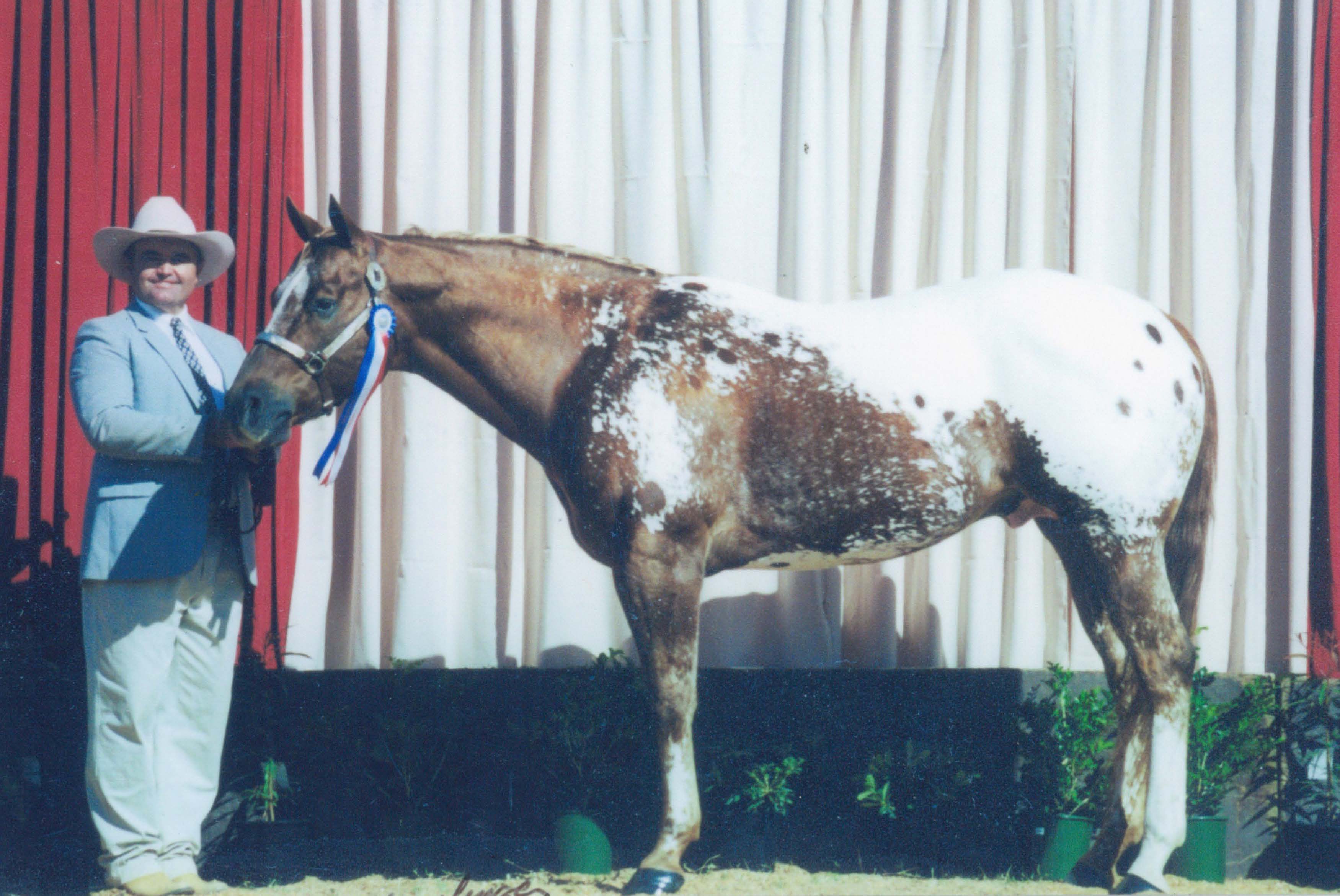 In 1991, at 8 months of age, WJ Brother in Arms or ‘Arny’ as he is known was purchased by Sam Jukic of QLD and was first shown at Beenleigh All Breeds Show. He was yearling, shown by Sharon Pollack and took home Champion Appaloosa Colt and the Grand Champion all breeds Colt or Stallion under 7 judges. It was the start of a long and prosperous career.

Broken in as a 2yo he began his successful and versatile show career under saddle. He was shown at the 1993Appaloosa National Show by Wayne Judge in 2yo events and taking home the HI Point 2yo award.

As a 4yo, Arny began breeding and has sired over 80 Appaloosa progeny. His foals include AAA State National and Futurity Champions including Arnys Bright Eye, ArnysMagical Dove, Cactus Jack and KNKs Arnys Wild Spirit. His progeny have successful careers of their own in the show ring across a number of Western performance events and Halter.

Outside of the Western Industry he has sired successfully eventers, dressage and endurance competition champions.

Arny himself is an exceptionally calm horse, with great conformation and athletic ability. He truly puts his personal stamp on his progeny passing on these traits and proving he is a versatile progeny producer.  Arny is also a proven colour producer with 98 of progeny being coloured.

Shown until the age of 6years heavily in Western Shows,Arny’s show career transitioned to focus on his reining ability and competing in the heritage classes.

Outside of the Appaloosa and Western Show ring, WJ Brother in Arms is known for to showcasing Appaloosa heritage in full Nez Perze costume explaining the breed and its origins to anyone ready to learn.

Along with his owned Sam, Arny’s promotion of our breed includes 16 years at the Brisbane Royal Show in the Appaloosa Breed stand promoting and parading his heritage costume, which in turn has gained some great TV and media coverage for our Appaloosa Industry.

Together they have attended the Beaudesert Festival of the Horse, Ag Shows, horse expos, parades, school displays and even been a part of Wedding photos in his native regalia.

At the age of 18, Arny unfortunately suffered a compacted large intestine and underwent surgery to remove a large part of his intestine. He recovered well but was prevented from breeding over the next 2 years.

Now as a 23yr old, he is in good health and continues to be used at every opportunity he can be to promote and provide information on the Appaloosa and has really made a significant contribution to the awareness and knowledge of the Appaloosa Horse and its ever important heritage.

Congratulations toWJ Brother In Arms and his proud owner Sam Jukic on this induction into the AAA Hall of Fame.